About Springest About our purpose and history. And how you can use our learning portal as a learner or provider.
Holacracy Learn about how Springest practices Holacracy since 2012. You can even (virtually) visit us for a Holacracy safari!
Sustainability How Springest contributes to a world with no carbon emissions and more equality through many responsible practices.

A real Holacracy tactical meeting at Springest in 2016 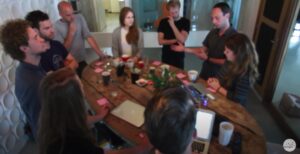 Springest works according to the Holacracy method. Holacracy is a new management model for organisations, whereby authority is distributed in an organic, flat structure with ‘circles’ (teams) and ‘roles’ (defining the responsibilities each team member has). Due to its distributed authority system each employee is empowered to decide how to energise their ‘roles’ and bears the responsibility for its operation.

Since 2012 Springest has been using Holacracy as a way to grow without the potential barriers of bureaucracy. Due to the dynamic and transparent structure, the organisation is able to stay agile. In Holacracy the mission (purpose) of the entire organisation and the objectives of all activities are central. Tensions and problems cannot be swept under the carpet, but serve as fuel for the development of the organisation. This is done by means of effective meetings, with plenty of room for initiative and influence of all team members.

While introducing Holacracy, Springest was supported by Energized.org – a licensed Holacracy implementation training provider. Energized.org strives for the creation of environments where work becomes liberated from traditional constraints. You can find multiple implementation stories on their blog, one of them is the story of our colleague Debbie

Articles about Holacracy practice at Springest

If you want to learn more about Holacracy, check out the HR / Holacracy subject on Springest.co.uk.

Springest organises Meetups for Holacracy enthusiasts on a regular basis, together with HolacracyOne and Energized.org. Please join the Holacracy Meetup Group to stay informed and participate!

Our cartoon on decision making in Holacracy

Inspired by the famous cartoon “what if we invest in learning, and those people leave > what if we don’t, and they stay?”, we asked famous cartoonist Nozzman to create a Holacracy cartoon for us. It  shows two manager types discussing red graphs going down, while an employee stands in the background, ignored, with an idea and green graph going up. It reads: “What if we let people make decisions and they’re wrong? | What if we don’t, and they’re right?”.

Click on the image on the right for a bigger version. Feel free to use it without alteration, and by linking to or mentioning this page as your source. You’ll find the Dutch version of this cartoon on our Dutch Holacracy page.

Use Springest in your organisation

Springest is the biggest learning platform in Europe. You can use it in your organisation to increase employee engagement, improve agility, save on learning procurement, and monitor compliance.

Learn about our enterprise solutions
All cookies must be accepted in order to display videos from YouTube.